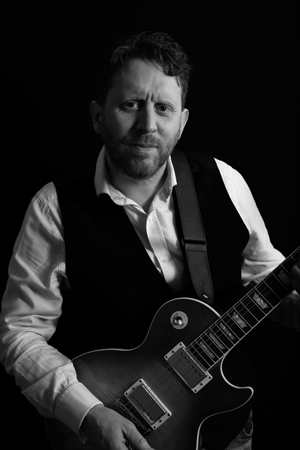 Phil Lewis is a guitarist and guitar teacher from Birmingham UK. Having released 4 instrumental solo rock/prog albums, his music has been described as wonderfully heartfelt and continues to appeal to a wide range of listeners - Please visit Phils music page where you can listen to samples and purchase CD's and digital downloads.

On this site you can also view online guitar lessons given by Phil, download good quality work sheets and also make use of a range of backing tracks.

Phil's musical background started as a teenager when he was given his first electric guitar. Influenced by players such as Jimi Page, Eric Clapton, Jimi Hendrix and Dave Gilmore, he soon found himself performing with different bands in and around the Birmingham club scene. He later went on to study at the Guitar School in Birmingham where he now teaches a number of musical styles to students of mixed age and ability.

Phils music has been licensed for use in a number of television, radio and other media projects around the world. He currently performs regularly with the band The Re-covered. In between teaching, gigging and recording, he also plays guitar for a number of theatre productions which has included Jesus Christ Superstar, Grease, Made In Dagenham and 9 to 5.